Three Reasons Nebrasketball Will Be Better in 2013

Let's face it- Nebraska hoops isn't exactly a storied program, and the transition from being trampled by Kansas to being trampled by 9 good teams in the B1G has been much more difficult on the hardwood than the gridiron. But every cloud has a silver lining, even out in Tornado Alley, so let's see if we can find a few for the Cornhoopers.

Share All sharing options for: Three Reasons Nebrasketball Will Be Better in 2013

1. Tim Miles Might Just Be The Man For This Job

Much like with Northwestern ultimately did with Bill Carmody this offseason, Nebraska had a decision to make a couple of years ago about its basketball coach. Doc Sadler had posted 3 winning seasons in a place utterly bereft of significant local talent or winning tradition, but had never finished higher than 7th place in the Big XII, or advanced beyond the 2nd round of the NIT. With the gleaming new basketball facility discussed below nearing completion, one of Tom Osborne's final major decisions as AD was thus to pull the trigger on Sadler and find a new head coach to oversee Nebrasketball's transition into the B1G.

Enter Tim Miles, who had taken Colorado State from a 7-25 record in his first season to an at-large bid from a much-improved Mountain West Conference in 2012. When he was hired, the discussion was frank and realistic. VCU's Shaka Smart and then-Ohio coach John Groce were the hot names amongst schools searching for coaches, but as you know, Smart remains at VCU to this day, and Groce stayed put in Athens for another season before taking the Illinois job. Whether Tom Osborne tried and failed to get Smart or Groce is unclear, but he was certainly the guy a lot of fans would have preferred. Miles was (and remains) not a rock star by any means, but he may well have been the best Nebraska could do. He largely built his own career, starting at the lower levels of collegiate competition and steadily working his way up to the MWC before Nebraska came calling.

Despite Miles' relative anonymity, he has enjoyed some pretty quick turnarounds at his previous stops; in this way, he might be compared to Minnesota football coach Jerry Kill. In his 2 seasons at NAIA school Mayville State, the Comets won 2 conference championships. His 4-year run at Southwest Minnesota State culminated in a 28-7 record, and a run to the D-II Elite Eight. Then, he took over at North Dakota State, and all he accomplished there was a successful transition from D-II to D-I. Oh, and an upset of Wisconsin at the Kohl Center. From NDSU, Miles moved on to Colorado State.

So it's not like Tim Miles has never made something from nothing. And the fact is, Nebraska isn't nothing. Its athletic department is one of the largest and most successful in the nation, its fanbase notoriously devoted to supporting the Huskers. Perhaps most importantly, this is an AD and fanbase well-grounded enough to understand the challenges Miles is facing. All Miles has to do is show the brass and the faithful something, and he's likely to get substantial leash to work with.

Same exercise, but for Ohio State 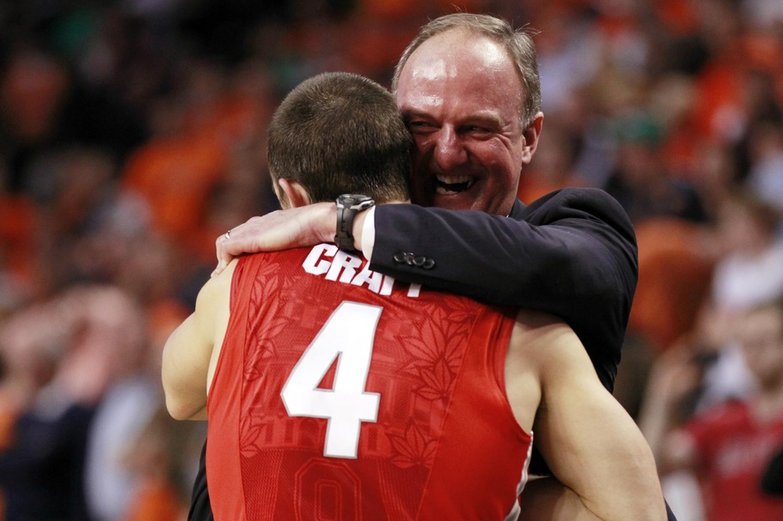 It's a dat easier to say why Ohio State will be better.

It's fair to note that his past coaching stops haven't exactly involved matchups with Tom Izzo, Thad Matta, and the rest of the B1G's excellent coaching fraternity, either on the court or on the recruiting trail. But if he was able to beat Wisconsin, given what he had, is it that outlandish to think he could do a great deal more with the resources Nebraska can bring to bear?

2. The Talent Level Is Improving

There were certainly some moments last season when Nebraska put the fear of Lil' Red in some teams that, on paper, they had no right putting up much of a fight against. Yes, for the most part their record (5-13 in conference play) reflected the general impression that exists of an unimpressive team. Yes, Nebraska graduated probably its two best players from last season in G Dylan Talley and C Brandon Ubel.

However, Nebraska does return a serviceable lead scoring option and leadership figure in senior G Ray Gallegos, and they feature very nice complementary pieces in sophomore F Shavon Shields and junior G-F David Rivers. Losing Ubel and gigantic C Andre Almeida might leave them a little wanting on experienced post players, but the Huskers should be able to consistently score with the core they have returning.

There is also cause for hope in the future, as Nebraska's 2014 recruiting started with a splash in getting a verbal commitment out of nationally ranked C Jacob Hammond. Hammond isn't a Nerlens Noel type of player, but he's still a cut above the kind of talent Nebraska has historically attracted. If Miles is able to secure another player or two of Hammond's caliber, opponents will need to prepare more carefully for their trips to Lincoln.

3. The Big Ten As A Whole Might Be Weaker

Although it's true this last point doesn't really address why Nebraska will be better, it's true enough that athletic teams are for the most part measured against their competition, unless you're following crew or something else where it's you against the clock.

After all, it was pretty clear that the B1G was the best conference in college basketball last year, right? With Indiana, Michigan State, Michigan, and Ohio State, you had four squads that were legit threats to win it all, and in fact Michigan almost did. Beyond that, Wisconsin was its usual stubborn out self, and Illinois and Minnesota both had plenty of talent, albeit perhaps not maximized consistently.

Well, if you compare the rosters of the upper-echelon teams from last season and this year, there's an awful lot of big names that are gone now. Burke, Hardaway, Thomas, Oladipo, Zeller, Watford, Mbakwe, Williams, Paul, Richardson, Nix, Berggren, Evans, Flying Tomato...a whole lot of excellent ball players, no longer around. Two schools are breaking in new coaches. Nebraska had its losses, too, as discussed above, but given what the results were last season, are they really losing that much?

Therefore, Nebraska's third reason to hope is, perhaps, that the B1G won't be such a brutal conference to slog through this year. The Huskers did, after all, have a few decent wins in the nonconference schedule last year, beating Wake Forest on the road, USC, and a Valpo team that went to the tournament. The two ugliest noncon losses, to Oregon and Creighton, turned out to not look as bad once we discovered how good both of those teams were.

A quick reality check would caution Nebrasketball enthusiasts to be modest with their expectations. For all the explaining away I've attempted, this was still a team that lost 14 games by at least 10 points. But when at or near the bottom, there isn't really anywhere to go but up, right?