Three Reasons Ohio State Will Be Better in 2013-14

Deshaun Thomas is gone. But hope isn't. Let's take a look into why Ohio State will build on their Elite Eight finish from last season.

Share All sharing options for: Three Reasons Ohio State Will Be Better in 2013-14

The Buckeyes' season ended on a shocking (get it?!?) note last year with an Elite Eight loss to Wichita State. Although Deshaun Thomas and Evan Ravenel were the only two players to leave, this 2013-14 team will have an entirely new identity. Let's further examine how this brand-new Ohio State team will be primed to make yet another deep tournament run.

This is the one aspect of Ohio State basketball where Thomas' absence does not affect them in the slightest. It is the only 100% known quantity on their team, and is guaranteed to win them big games in big spots. Every basketball fan knows about senior Aaron Craft, and although defense is his forte, he's known to make an absolutely ridiculous big shot on the biggest stage with no time left.

Craft averaged 2.08 steals per game last year, good for second in the B1G behind Victor Oladipo, and now that he's a senior and the unequivocal leader of this team, his defense should move up a whole new level.

Junior Shannon Scott also ascended to a new level with the help of Craft last season. As the 6th last season, he played 20.9 minutes a game, averaging 1.7 steals a game. Both were selected to the 2013 All-Defensive team last year, and are known for their epic clashes in practice. Scott will see an elevated role this season, and will be a spark off the bench to shut down any hot hand.

But let's not forget about the other member of this great backcourt. Senior Lenzelle Smith Jr. will continue his role of playing (generally) mistake-free basketball, leaving the big plays for his teammates. When he's shooting well, he will make the defense pay. But if his shot is off, he finds his way on the stat sheet in other ways, like a 10-rebound outburst against Purdue on 1-6 shooting, and another 10-rebound game on 1-4 shooting against Michigan. His rebounding will be a saving grace for this team, as they face major challenges with depth in the post. But the backcourt should be a constant force for good throughout the whole season.

(Side note: look at this video. I have so many questions. How is Shannon up by 40? That's a disgustingly high number. What characters are they using? What tracks are they using? Is it even on the N64? Does Thad ever play anyone in the locker room? Someone answer these questions for me.) 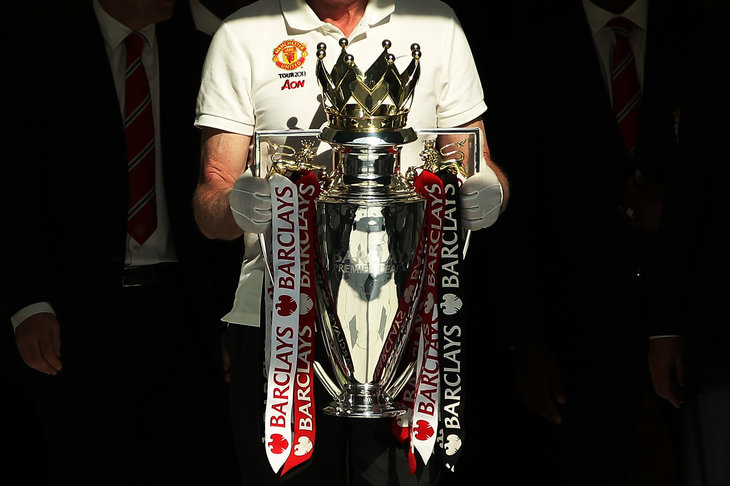 Kevin on how every B1G team fits into the Premier League.

When last year's Ohio State offense was bad, it was BAD. That's because their offense revolved around the silky yet not always efficient Deshaun Thomas to take the ball on an iso and score. The stats tell the story the best. Thomas led the Big Ten in scoring at 19.7 a game. That's a big 19.7 points to replace, but he didn't always score those points in the best way possible. He led the B1G in attempts at 583 (good for second in the entire country), and was second in the B1G with 569 possessions a game. But the case against him begins with his effective FG percentage. He was 23rd in the B1G, at 50.6%. For those unfamiliar with this stat, it basically rewards you for taking three-pointers as opposed to long mid-range jumpers, because three-pointers are way more efficient than long twos. Therefore, like this Basketball-Reference page states, if one player shoots 4-10 with 2 threes, and another goes 5-10 with 0 threes, they have the same effective FG percentage of 50%. So Thomas was taking a high volume of generally ineffective shots to acquire his high point totals. Further studies of his inefficiency last year are in his low offensive rating and true shooting percentage. The crux of what I'm saying is that don't you ever for a second get to thinking he's irreplaceable.

The 2013-14 Buckeyes will look towards two of their wings to pick up the scoring slack, Sam Thompson and LaQuinton Ross. Thompson is a GIFtastic young man who was second on the team in blocks and steals last year while doing things like this. And this. He's going to have to be more aggressive to pick up the scoring, but his partner in crime, LaQuinton Ross should help as well. Ross came into his own during the tournament, burying a dagger into the hearts of the Arizona Wildcats in the Sweet 16. Interestingly, if you compare Ross' season last year to Thomas' freshman campaign, they have eerily similar stats in almost every facet. So if history repeats itself, Ross is due to break out. He didn't play with tournament-level authority throughout the whole season, but with this newfound confidence, he should be willing to take on the scoring load.

It will be interesting to see these two wings usher in a new era of scoring and see who steps up to become the go-to guy when they need a late bucket. I just hope they do it in a more efficient fashion than ol' Deshaun.

The loss of Deshaun Thomas also affects their inside game, as he was the team's leading rebounder at 6.2 a game. Thus, the team will have to rely on some combination of Thompson/Ross with Amir Williams at the 5. Williams was a highly touted recruit out of high school that just hasn't found his groove in the college game. He only averaged 3.9 rebounds a game, and for a 6-11, 250 pound behemoth, that should improve. If you want to dig deeper into his tough season last year, check out this review from our friends at Land-Grant Holy Land.

So Ohio State has no rebounders. But guess what? Trevor Mbakwe is gone. Cody Zeller is gone. Derrick Nix is gone. Ryan Evans and Jared Berggren are gone too. Adreian Payne and Mitch McGary are really the only two dominant big men in the conference. You could add A.J. Hammons of Purdue and Jared Swopshire of Northwestern to the list of other powerful rebounders, but the contenders of this conference will be running small this year. Michigan State, as discussed before on this site, will look to run a smaller lineup than usual. Wisconsin and Michigan will most likely start the season with wingers like Sam Dekker and Glenn Robinson III at the 4, neither of whom are bullies down low. The key to success this year will come down to guard play, especially on the defensive side of the ball. I already discussed how Ohio State will have one of the most defensively tenacious backcourts in the conference, and if they can disrupt the flow of the opposition, they have a chance to beat anyone, regardless of their low-post presence.

There you have it. The 2013-14 Buckeyes will look remarkably different from last year's squad, and are heavily dependent on some unknown quantities. But this new team should be stronger defensively, more efficient, and has plenty of experience on the big stage. They should pick up right where they left off last year, and will be back in the thick of it come March.