The B1G's reputation as a physical conference is largely built on its perennial forests of talented big men. Who should we watch for thunderous dunks and authoritative blocks and boards this season?

This is more of a projection pick than the rest of this list, but Olah is well-positioned for a strong year. He was often (somehow) a forgotten man in Bill Carmody's Princeton system last season, but coming out of high school, he displayed the type of finesse game that few prospects of his size can match. Moreover, he demonstrated that he still possesses most of these skills this offseason in international competition, playing for the Romanian national team.

It would be unrealistic to expect Olah to continue his roughly 17-point, 9-rebound per game pace from the FIBA U20 competition into B1G play, but getting some run as a featured player can only have helped his confidence. There's also a very good chance that Chris Collins and his new staff represent a substantial upgrade in developmental coaching over the previous regime. Olah will have to fight off a 7-foot teammate in Chier Ajou for minutes in the post, but if Olah can translate even some of the offensive game he flashed in Europe back into collegiate competition, he'll be miles ahead of Ajou offensively and should get the lion's share of the post minutes and touches.

Last season, Woodbury was the classic 7-foot freshman prospect: flashes of promise and hints of unteachable athletic talent combined with some trouble adjusting to the college game. Defensively, Woodbury was quite good at times, though his running mate Gabe Olaseni was a more consistent rim-protector.

His modest scoring numbers (4.8 PPG) were to be expected in light of Iowa's excellent wing combo in Roy Devyn Marble and Aaron White, but some of his other numbers hint that when he had his chances, he didn't do a great deal with them: a sub-.500 shooting percentage for a guy who's seldom more than 4 feet from the basket leaves something to be desired. More telling was the fact that he averaged less than 17 minutes per game, largely a product of his inability to stay out of foul trouble.

Unlike Olah, Woodbury plays with enough quality scorers that he is unlikely to become a central feature of the Hawkeye offense (in addition to Marble and White, Iowa adds Peter Jok and Jared Uthoff to the fold this season). Woodbury's biggest step forward will be made if he can just stay on the floor more often; he does, after all, carry a significant recruiting pedigree, having attracted attention from the likes of UNC. He played capably for a freshman last season, but like Olah, his best ball is most likely in front of him.

The key to whether Hammons turns into a coveted pro prospect or an unremarkable really tall guy all comes down to consistency and effort. Although his overall numbers are pretty impressive- 10.6 points, 6.0 rebounds, and 2.0 blocks per contest- his numbers are a classic example of how averages can be misleading. Hammons turned in a few monster games, such as his 20-point, 7-rebound, 3-block performance against Michigan State, or his 30-5-5 line in Purdue's curb-stomping at the hands of the Hoosiers in which he looked like the only Boilermaker interested in playing. However, he also had a tendency to check out at times- in the rematch with Indiana, he contributed just 6 points and 3 rebounds.

Same exercise, but for point guards

Michigan State is gonna be good, you guys

When Hammons is on, he's nigh-unstoppable. When he's off, he can be an immensely frustrating player to watch. However, Purdue coach Matt Painter has a well-deserved reputation for getting the most out of his players, and Hammons' lack of effort did not go unnoticed by Painter, as the big man spent a lot of time on the bench in favor of less-talented teammates down the stretch last season. If, as I suspect, Painter is able to prove that last year's uninspired Boiler squad was an aberration instead of the new normal, Hammons will likely be the largest beneficiary. And even if Hammons doesn't display the sort of effort and motor that Purdue players are known for, his size and physical tools will still get him consideration from NBA scouts.

Yet another sophomore-to-be, McGary's progression over the course of last season hinted at a potential All-American campaign this year. Though Trey Burke rightfully got the bulk of the media accolades, Michigan likely would not have made its run to the title game last year without the blistering performance McGary turned in over the course of the tournament.

The first half of last season, McGary looked as lost as most freshmen do, and was only able to take the starting role after a midseason injury to fellow big man Jordan Morgan. After scuffling with head-scratching mistakes, he adjusted very well during conference play. His season averages are not particularly impressive, but again, averages don't capture the context of a player's entire season. McGary's improvement over the course of the year was dramatic, and he wields not only the typical post game of a man his size, but an outside shooting touch (though it does not quite extend to the 3-point line) and a strong nose for the ball when crashing the offensive boards.

McGary surprised some people by not following teammates Trey Burke and Tim Hardaway Jr. to the NBA. But with a second full season and most likely an expanded role, he'll have plenty more opportunity to show pro scouts what he can do.

I can already hear the cries of 'homer!', but if I had to take either Payne or McGary for one game, it would be Payne by a slight margin. But to be honest, it's pretty close to a push amongst the top two guys, and both figure to be prominent pieces on conference contenders this year.

Early in his career, Payne's minutes were severely restricted by his smaller-than-normal lungs, a congenital condition that prevented him from playing long stretches at a time. For most of his first two seasons, it was uncertain if he'd ever be able to maximize his substantial athletic gifts with his lungs literally unable to give him the air to do so. However, by way of a dedicated conditioning program and Tom Izzo's decision in the middle of last season to go with a 3-big lineup, Payne's minutes jumped to nearly 30 per game in the second half of last season.

What was more impressive than the additional minutes, though, was what Payne did with them. As this breakdown
discusses, Payne showed marked improvement in nearly all measurable facets of the game- he pulled in more rebounds, shot better from the free throw line, and broke out a highly effective 3-point shot, all while fouling less.

That 3-point shot, to me, is what gives Payne a slight edge over McGary and the others on this list. It may seem like an unimportant skill for a big man, but in reality, it's a threat that can break an entire defensive scheme. His mechanics aren't great, but if he hits reasonably close to the 38% he made last year, he'll give his defender no choice but to follow him out to the 3-point line- and away from the lane, making space for Keith Appling, Gary Harris, and Brandon Dawson around the rim. 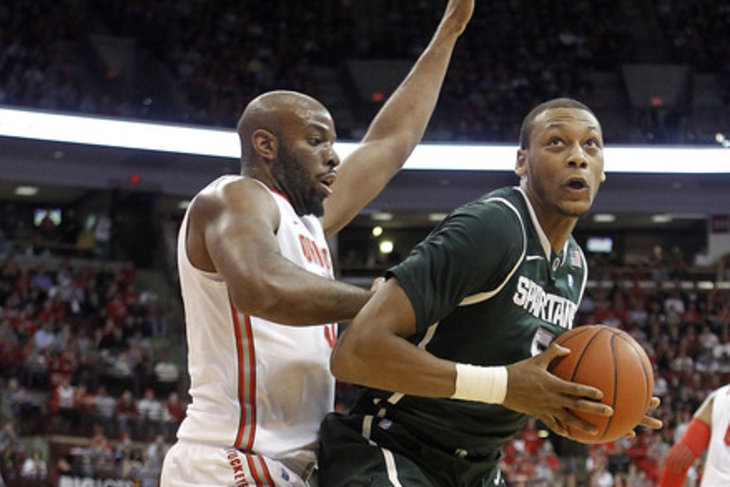 The versatile, talented, powerful big has to step up if Michigan State is going to fulfill its potential in 2013-14.

So, what say you? Who have I mortally offended by my omission? The conference lost a pretty darn good crop of big guys from last year, but the most promising thing about this list is that it features four sophomores. Sure, a single good season from a 7-footer, and the NBA will come calling pretty quickly, but chances are we'll get to see at least a couple of these guys develop into great college players over the next few years- and I know I'll be enjoying the last year of Payne, as well.