Purdue may be young again in 2013, but the Boilermakers will be vastly more experienced as they look to get back to the NCAA Tournament after last year's disappointing season.

Share All sharing options for: Three Reasons Purdue Will Be Better in 2013-14

Purdue's season last year didn't turn out as planned, with the Boilermakers struggling early out of conference and sliding to a 16-18 record. The team's youth was a major catalyst in the rebuilding season with inconsistency on offense costing the team multiple games. The Boilermakers started to figure it out during Big Ten play and will be looking to make their way back to the NCAA Tournament in 2014 after a rare miss for Matt Painter. Here are three reasons why Purdue will be better in 2013-14.

It Can't Get Any Worse

Purdue had a decidedly disappointing season last year, finishing with a losing record and getting bounced early from the CBI. Of course in hindsight the end result wasn't a major surprise, as the Boilermakers were coming off of several middling (at best) recruiting classes, the loss of star Robbie Hummel and were an inexperienced program in the nation's toughest conference. Even worse was the fact that the returning players included a medley of role players that were all flawed in one way or another. While the Boilermakers did have several players with experience, it included guys like Anthony Johnson, Travis Carroll and Jacob Lawson, all players who had failed to live up to their potential since joining the team. When everything was pieced together the Boilermakers had a team void of leadership and no one made much progress in this area until later on in the season.

After the season the Boilermakers had three players transfer out and it may be best for the program. Anthony Johnson at one point was a gifted shooter that was expected to be an offensive spark plug, Jacob Lawson was an athletic freak of a power forward and Sandi Marcius was a raw big man with a modest amount of upside. Of course both Johnson and Lawson got buried at the back of the rotation, struggling offensively and seemingly at odds with Matt Painter throughout their careers at Purdue. On the flip side, Marcius went through a few years seemingly lost before breaking out last year when stealing minutes from a listless A.J. Hammons. Of course with the return of Hammons and Jay Simpson, minutes were not guaranteed for Marcius and he left in attempt to possibly angle for a professional career.

The trio of transfers will allow Purdue to basically wipe the slate clean and build from their young talent instead. Last season Purdue broke in five different freshmen, with four of them starting throughout the season and Simpson redshirting towards the tail end of the non-conference slate. Besides these five underclassmen, Purdue has added three recruits for 2013, as well as two fifth year seniors in Sterling Carter and Errick Peck (already detailed here). When everything is said and done, Purdue will have a roster with 12 different players entering their first or second season with the Boilermakers.

Speaking of fresh faces, Matt Painter has significantly improved his recruiting classes the last two seasons and 2013 is once again another strong class. Per Rivals, all three recruits are listed as four star players and all three are also listed in Rivals Top 150 recruits. Out of the three commits, Kendall Stephens is rated the highest at 61st, followed by Bryson Scott at 75th and Basil Smotherman at 112th. The 2013 class will also benefit greatly from not being thrown to the wolves like the freshmen in 2012 were, as they'll be able to develop a bit more instead of being expected to start from the get go like the 2012 freshmen were.

All things considered, Purdue has improved across the board heading into 2013. The team isn't perfect, but there's only room for improvement for a team that brings back their main contributors and adds several exciting new faces to the mix. 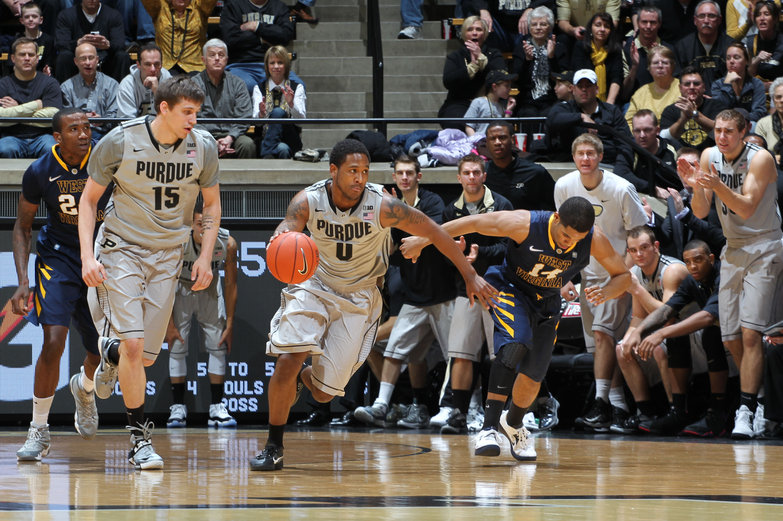 Bryan on how Terone is the one of Purdue's 43 players named "Johnson" who can help them on their quest to make the NCAA Tournament after a rare miss.

Purdue Will Be Considerably More Experienced

There's no way to twist the facts, Purdue will once again be a very, very young team in the Big Ten. The team is predominantly built on freshmen and sophomores, with only one junior and four seniors. Of course that number is a bit skewed when you realize the junior is walk-on Neal Beshears, two of the seniors are transfers from outside programs and one of the other seniors is Travis Carroll, who very likely will be buried in the rotation. Regardless of how young Purdue is again this year, they will actually be vastly more experienced.

Purdue was forced to play numerous freshmen last season, including Ronnie Johnson at point guard. Johnson's freshman season was hit or miss and Ronnie definitely had some issues with consistency. However, Johnson now has a full season as a starting point guard under his belt and will look to utilize his experience to cut back on the unnecessary turnovers and immature decision making. If Johnson simply slows it down a bit and stops rushing to the rim at breakneck speed he very likely could considerably improve his turnover rate and run a more fluid offense. Looking back at the 2012-13 season and a lot of the mistakes made by Ronnie stem from poor decision making, something that should improve with experience.

The team will also be looking for A.J. Hammons to break out in his sophomore season. Seemingly everyone that follows the Boilermakers has acknowledged the skills and potential Hammons has, realizing he's capable of being the conference's best player. The problem last year was Hammons routinely came off like he could care less about what he was doing or his team in general. If Hammons grows as a player and puts in the effort the sky will be the limit for the big man. One has to wonder if all the talk about him being a first rounder possibly in 2014 will finally create the incentive for Hammons to put it together. Look no further than his first game versus Indiana to see what Hammons can do. Hopefully the seven footer will mature enough in his sophomore season and piece it all together.

While Ronnie Johnson and A.J. Hammons will be the main sophomores to watch heading into the season, Purdue will also benefit from Rapheal Davis, Donnie Hale and Jay Simpson all playing last season. While Simpson ended up redshirting, Painter's decision to have him play as many games possible before redshirting will likely pay dividends. The redshirt freshman has had some conditioning issues but Painter has been consistent in promoting the skill set Simpson brings to the table. At 6'9 Simpson would also allow Purdue to play bigger as they could run a more traditional set with Hammons at the 5 and Simpson at the 4. While Simpson ended up redshirting last season, his playing time in 10 games allowed him to at least get his feet wet and add some experience, including playing time versus three teams that made it to the NCAA tourney.

One of Purdue's biggest issues last season was their offense and their inability to score points consistently. Even more troubling was the teams struggle shooting outside or basically anywhere away from the rim. Purdue has been a defensively minded team under Painter and while their defensive performance wasn't perfect in 2012-13, it was light years ahead of the offensive output.

So basically the defense was still passable and just needed a little bit of offense to get by. Unfortunately for Purdue it didn't happen as the team finished outside of the top 200 for field goal percentage, three pointers, free throws and points per possession. The overall result was very troubling and something in dire need of improvement heading into the season. So when Purdue saw several players transfer out after the season, Painter focused on the offensive side of the ball and brought in two fifth year seniors that have shown the ability to hit from beyond the arc. While playing time will have to be earned for Sterling Carter and Errick Peck, both seniors have a career three point percentage north of 35%, which is higher than all of the returning players for the Boilermakers.

Besides the addition of Carter and Peck, the Boilermakers will hope that Terone and Ronnie's time spent in the gym during the summer will translate to improved shooting. Terone made some strides throughout last season and a similar progression would go a very long way for the Boilermakers. The team's offense will also look to benefit from the sophomore jump from several players and the addition of Stephens and Scott.

If Purdue can improve their outside shooting it will go a very long way. Guard wise, if both of the Johnsons can continue to develop their outside presence it will only make it easier for both of them to drive to the rim. Also, an outside presence would help open it up down low, which would be beneficial for sophomore center A. J. Hammons. Purdue's offense has been going through the motions as of late, but it finally feels like the talent is there to start making improvements and for the Boilermakers to start scoring the ball without as much difficultly as they had last season.