The Wolverines have slipped up this season on numerous occasions and many blame star Michigan forward Glenn Robinson III, but is the criticism fair?

Share All sharing options for: Has Glenn Robinson III Really Been Underachieving?

One of the biggest storylines for Michigan this season has been the return of Glenn Robinson III (GR3) and what many perceive as being disappointing play this season.  Many claim he does not touch the ball enough, fails to be assertive, and takes bad shots.  So are they right?  Let's take a look by breaking down two plays that tap directly into many of the criticisms:

Photo 1: Walton takes the ball up the court and receives some backcourt pressure from Duke. 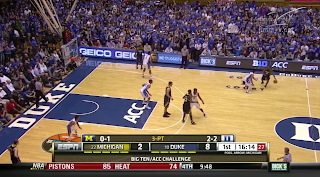 Photo 2: Walton attempts to drive the ball, but immediately receives defensive pressure, which makes him throw the ball back to the outside.

Photo 3: GR3 touches the ball and immediately throws to McGary at the top of the key. 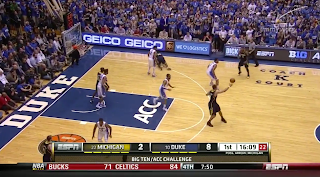 Photo 4: McGary follows by tossing the ball to Stauskas, who tosses it to LeVert.  McGary turns toward the hoop.  This is where you typically see some type of screen by McGary to open the ball-handler up outside. 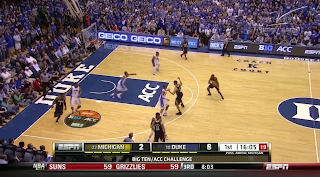 Photo 5: McGary sets a pretty weak screen and moves inside (presumably looking for a pass).  By the time he does this, Duke has brought an extra defender to help against LeVert.  The key thing to remember here is that LeVert has 4 options at this point: drive left and hope McGary can screen at least one of the defenders, drive right (straight into multiple defenders, simply shoot (no space to shoot), or pass the ball and reset the offense. 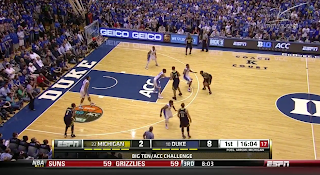 Photo 6: LeVert goes with option 1 and drives the ball left.  The problem is that not only does the helping defender stay with LeVert, but McGary is not able to offer help inside.  McGary tries a backside screen on the outside defender (works for the most part), but LeVert is not only not in position to use it physically, but the other Duke defender is in perfect position to stop a drive to the hoop.  He never bites on LeVert driving because LeVert gets there way too slow.  As a result, LeVert has to take the air out of the ball and reset himself outside the arch. 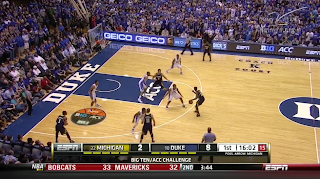 Photo 7: LeVert then decides to drive the ball right.  McGary comes out presumably to set some type of screen, but he does almost nothing to impact the defender's movement and the defender closer to the hoop has no trouble moving over on LeVert. 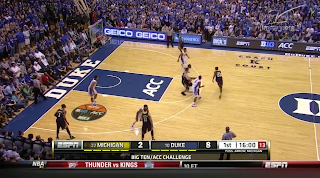 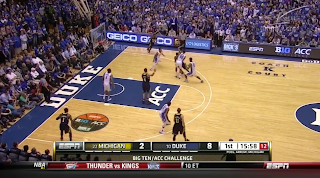 The thing about this possession is that it looks incredibly ineffective, but it is literally a pass away from working.  There are three things worth noting on this play.  First, LeVert has to improve his ability to sense and respond to the double team.  As soon as Duke brings that extra defender over, he has to get the ball out of there.  If he would have been able to drop it to McGary, you're looking at an open shot in the paint, or an open pass to GR3 on the wing.  Both of those are great options.  Second, McGary has to improve on setting screens.  If LeVert is having trouble sensing the double team, he needs to wait a little longer before moving to slow down the defender.  He may have a little more difficultly catching and shooting off the roll, but it's more effective then letting LeVert drive right into three Duke players.  Finally, many are going to look at this and say the other Michigan players were inactive.  The problem is that you need these guys on the outside to spread the floor.  Specifically, look at GR3.  He ran on the backside of the court, which opened up LeVert's first attempted driving lane.  LeVert just couldn't get there quick enough.  Also, it's important to note that GR3 got himself a wide open look at the end of the possession.  If LeVert gets the ball to McGary, there is a good chance he's going to shoot wide open.  In this case, not "touching the ball" probably isn't a bad thing.  He helped space the floor and if things had worked out just a tad better, Michigan could easily have been looking at a wide open 3 from GR3.

Photo 1: Once again, Walton begins with the ball in the half court. 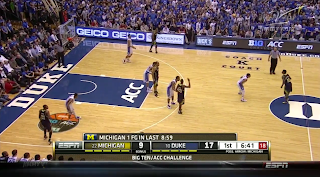 Photo 2: Walton gives up the ball to GR3 on the outside.  GR3 stops with the ball and looks for LeVert near the top of the key. 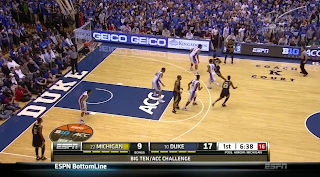 Photo 3: LeVert catches the ball and sets his feet. 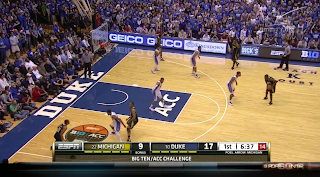 Photo 4: GR3 moves inside and clears a passing lane for LeVer to Walton on the outside.  At this point, Walton has 3 options: drive the ball (straight into a defender), use GR3 as a screener to get an open shot behind him, or pass the ball. 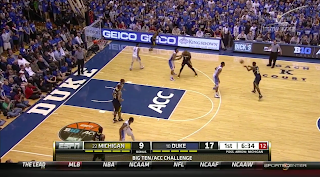 Photo 5: Walton moves back, but the defender stays with him and GR3 moves down into the post.  At this point, his best option is to either try and throw it in to GR3 or use him as a backside screener and hope he can beat the defender to the hoop. 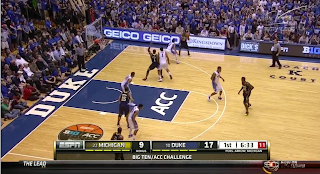 Photo 6: Jabari Parker is able to get around GR3 toward the paint and cut off the driving lane.  Walton's original defender also moves with him.  The key thing here is that GR3 is now unguarded and in passing distance from Walton.  Considering Walton is more than a half foot shorter than Parker and is not Trey Burke, the best decision is to throw it back out to GR3 and hope he can make a play.  One could argue GR3 had a weak screen on Parker, but the boost of getting wide open far outweighs this. 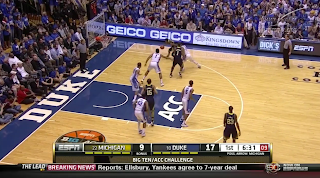 Photo 7: As mentioned, GR3 is WIDE OPEN here.  Also worth noting.  LeVert and Irvin both have space around the court, but Walton's only realistic passing choice here is GR3 or he risks turning over the ball to the defender between him and Irvin.  Maybe he makes it, but GR3 is the best choice. 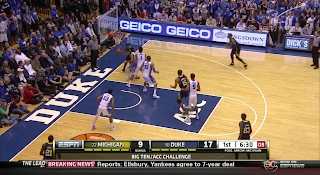 Photo 8: Walton is able to make the pass and GR3 gets a great look outside the arch.  At this point, any Michigan fan has to be screaming "take the shot" from their couches. 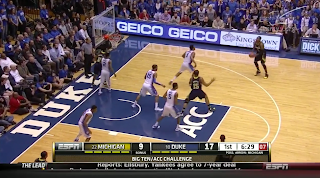 Photo 9: It is hard to tell from this picture, but for some reason, GR3 decides to put the ball on the floor, drive up a few feet into 2 point territory, then take a contested shot under Jabari Parker. 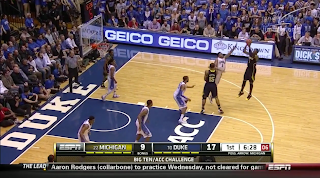 Similar to the first play, this may look unorganized at first, but Michigan is using a variety of schemes to get guys open and get them good looks.  This is a well run play that gets the ball into an open shooter's hands.  One thing that separates this from the last play: Walton is much better at passing out of pressure situations than LeVert.  This may not be surprising considering Walton is a point guard and LeVert is not (at least right now), but it is important.  Michigan had two guys that were capable of passing and driving under pressure last season and one guy (Burke) that could do both at an All-American level.  Being able to drive the lane is great, but when defenders move over, the player has to be able to react.  As Walton and LeVert mature, they are going to get better at these skills and it is going to get Michigan a lot more quality shots.  The biggest thing to note here is that GR3 botches this play for all intents and purposes.  It's hard to blame a player for missing an open shot, but GR3 decides to move into the pressure here.  There is just no argument here that GR3 got a better look by moving inside.  This is my personal pet peeve with GR3's game and it is incredibly irritating.  Not only will any advanced stats expert tell you that taking a 3 pointer is way better than a long 2 point shot, but it's even more clear when the 2 point shot is contested and the 3 is open.  Maybe Parker gets there in time to stop GR3's 3 point attempt, but it seems incredibly unlikely and even more unlikely that he will stop the shot without contact.  Even if GR3 had just sidestepped Parker, this would have been a great play.

These are just two examples of the role GR3 has played in Michigan's offense in recent weeks.  What is perhaps more relevant is that these are the types of plays that get GR3 his criticism.  The critics are having a field day with GR3 right now, but only some of it is justified.  The biggest thing is that GR3 allows Michigan to play a smaller lineup that allows it to have a scoring option at every position.  Fans have seen what the two big lineup looks like and it is not pretty.  GR3 is the guy that keeps that big lineup off the court.  Along with this, just because GR3 is not touching the ball does not mean he is not impacting the game or helping the team.  Everybody likes to demand that star players get more touches, but all touches are not created equal.  If a guy gets a good look, take it, and if they don't, wait.  Has GR3 been perfect?  Of course not.  The second play alone displays a part of his game that needs improvement.  However, it is important to remember that many of GR3's impacts to the game are often unseen (lineup, defense).  One can debate whether his game is worthy of the media hype he received this summer (NBA Lottery pick), but it is unfair to judge a guy based on what the media has projected.  Just take a look at Anthony Bennett if you want to put faith in draft status.  He was the #1 overall pick, but nobody would have taken him over Trey Burke in college and at this point, probably not even in the pros either.  GR3 is not a perfect player, but he brings a boost to Michigan in numerous ways and simply criticizing him for not touching the ball or not being "assertive" is unfair.  Along with this, it is important to note that GR3 is not done improving yet.  There should be plenty more to come.