MSU is ranked as the nation's #2 team coming into the season. Can the return of Gary Harris and Adreian Payne propel the Spartans back to the Final Four?

Share All sharing options for: 2013-2014 Michigan State Basketball Preview: Can The Spartans Control The Big Ten?

The Big Ten has received much attention in recent years for its strength. It has received this attention once again over the summer with no other team receiving more hype than Michigan State. The Spartans are not only ranked #2 in the nation, but have also been picked by virtually everyone to win the Big Ten and make a serious push for the Final Four in March. MSU returns 4 of 5 starters from last year's team and 6 of the top 7 players in minutes last season. With all this returning talent and experience, can MSU live up to the hype?

This may be the easiest lineup to project in the Big Ten. Having four returning starters is the major reason for this, but having many solid returning players helps as well. We've already looked at both the frontcourt and backcourt for the Spartans, so let's take a look at who will be the likely starters from the 1 to the 5:

Keith Appling: The senior point guard is back again and figures to be a major part in MSU's drive for a Final Four run. Appling led the team in scoring last season with 13.4 points per game and also led the team in assists with 3.3 per game. Though Appling has had struggles with turning the ball over (2.3 per game), he is still a dynamic offensive weapon with the ball in his hands. He can run in transition and is one of the best at driving the hoop and dishing to teammates. The Spartans will need him once again to propel the offense.

Gary Harris: Spartan fans rejoiced when Harris announced he would be returning for this season. The returning Big Ten Freshman of the Year is one of the best pure talents in the conference. He is an excellent shooter (41% from three), can defend the ball, and has the ability to drive the basket as well (12.9 ppg). The big thing here to note is that Harris should be healthy after struggling with his shoulder last season. Though we can't be sure how much this will improve his game, it seems like an easy bet to assume Harris will once again be a key factor for MSU.

Branden Dawson: Dawson didn't live up to expectations last year, but that's no reason to think he will not be a big factor this season. He struggled with recovering from an injury last season and should be healthy to start the year. Dawson is a versatile player that has the ability to play multiple positions for MSU. Expect him to play time at both small forward and power forward. If he can show that extra jump he displayed during his freshman season, he could be one of the most important tools in allowing MSU to use multiple lineups.

Adreian Payne: Though Harris gets the attention, Payne may actually be the most important player on this roster. He is MSU's one proven big man. He ranked second on the team in offensive, defensive, and total rebounding rate, 3rd in blocking rate, and 3rd in usage among starters according to Basketball Reference. When you add in that many of the players above him did not play major minutes, the stats are even more telling. He will be MSU's leader and best option down low. He will have a much different challenge without Derrick Nix, but Payne has the potential to be one of the nation's premier big men.

Matt Costello: Costello is likely to get the nod to fill in for Derrick Nix's former role. Though Costello has not shown he can perform at anywhere near Nix's level, he is an experienced player that should be able to defend and rebound. If MSU decides to use Costello extensively, they will have to devise some ways to get him involved offensively since he has not been particularly productive there (44 points produced last season). The good news for Spartan fans is that they already have four scoring options in the lineup. Even if Costello isn't elite in terms of scoring, their offense should be fine. 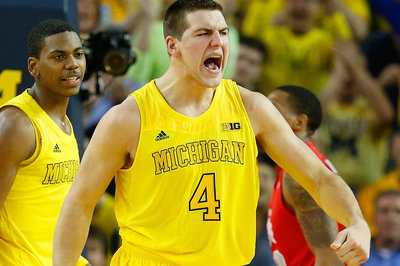 The biggest strength of MSU is their experience. Most teams have major question marks entering the season at least a few positions on the roster. This isn't the case for the Spartans. Almost every position has a returning starter. Plus, the team has plenty of bench options and even the "new" starter will likely have game experience. The backcourt of Appling and Harris alone makes this one of the best teams in the conference. When you add in Dawson, Payne, Valentine, and Trice, this team goes to another level. There are certainly areas to improve and grow, but having so many known quantities is almost unheard of among elite teams in today's game.

If there is a weakness on this team, it is a relatively thin frontcourt. Payne is certainly an All-American candidate, but the options outside of him are a little more questionable. Costello and Alex Gauna have experience, but neither flashed "starter" when they went into games last season. Plus, if MSU does use two bigs, they are going to have to lean on their depth upfront, which probably isn't extremely enticing for MSU fans. Sure, the Spartans could just go small and only use one big when either Payne or Costello needs to hit the bench, but having two bigs out there for extended periods not only requires some bench time from others (they have to sit for at least a few mins), but will also result in a lot of fouls for the starting big men. Players like Gauna are going to have to be productive on the court if MSU wants to stick with the big lineup. Maybe MSU ultimately goes small, but until then, they need a player or two to really step up to give them some security upfront. Along with concerns about the frontcourt depth, MSU also needs to develop a top scoring option. Having a top guy is huge in the NCAA Tournament and in any deep run. Gary Harris could easily step into this role, but he will have to improve his game to do so. This are relatively niche weaknesses, but for what MSU wants to do this season (win it all), they could be crucial.

Look for Denzel Valentine to get significant playing time this season. The sophomore from Lansing (MI) averaged 20.8 minutes last season, but that might even go up this year. As noted above, if MSU decides to go small, it means they will have to bring another guard off the bench. Valentine will likely be the guy. Having a lineup of: Valentine, Appling, Harris, Dawson, Payne would be devastating offensively. All five options in that lineup could score and the team would still have size to compete. Valentine has shown the ability to run an offense and though he certainly had some struggles (29% turnovers percentage), he could quickly turn into MSU's top bench option.

The Spartans are incredibly talented and experienced this season. There have numerous options all over the floor and East Lansing should prepare to see one of its best teams in recent memory. Izzo will have to find a true 5th starter and a "go to" scoring option, but with several options before him and plenty of time, this should be something that is not impossible to address. This team will be very good regardless of any problem, but if they can figure out their issues (which are few), they could be a prime contender to make the Final Four and perhaps win it all.

Is Adreian Payne The Most Important Player For MSU?