Could defense carry Illinois in the post-Paul/Richardson era?

Behind big man Nnanna Egwu and the schemes of coach John Groce, could this be the beginning of a defensive renaissance in Champaign?

Share All sharing options for: Could defense carry Illinois in the post-Paul/Richardson era?

Over the years, as Illinois cemented itself as a perimeter-oriented squad, you typically expected certain things of the Fighting Illini. From wildly volatile shooting performances to frustrating interior defense, the only thing that could be reasonably expected was you yelling at your television for one reason or another.

That's what makes this recent start from the 2013-14 Illinois team so exciting. They're not only winning games, including that thriller over UNLV on Tuesday. This group of players, for the first time, seems to be reflecting the true effect of John Groce over the entire program.

In our season preview, Bryan wrote that the Fighting Illini would need their young big guys to step up for another NCAA Tournament appearance. It's not that these players would carry the team -- it's just that Tracy Abrams, Joseph Bertrand and breakout junior Rayvonte Rice could only reasonably be expected to do so much, and someone would need to fill those gaps.

It's early, and the opponents have ranged in quality, but Nnanna Egwu and Jon Ekey have certainly handled themselves well so far. And more importantly, combined with improved perimeter defense now that Brandon Paul's inconsistencies are a thing of the past, the Fighting Illini are suddenly looking like quite the formidable team on the defensive end. 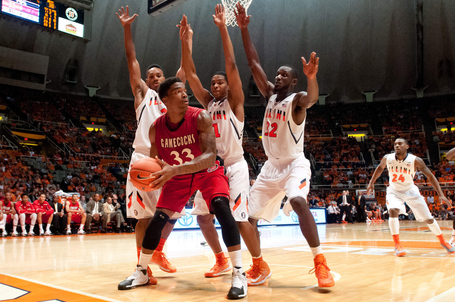 Because we always like to gauge quality teams against the best opponents, we might as well start with the recent win over UNLV. Playing on the road, the Fighting Illini held the Rebels to 38 percent shooting from the field and 29 percent from beyond the arc.

In the final six minutes against UNLV, the Illinois defense allowed two points on 1-of-6 shooting to rally from five down.

Because it's only six games, it's important that all of this information be taken with a grain of salt, but the numbers say that defensive effort in Vegas wasn't a total fluke. According to KenPom.com, the Fighting Illini are 14th nationally in adjusted defensive rating. That means that, for every 100 possessions, only 13 teams are giving up fewer points than the Fighting Illini right now. I don't know what exactly that says about the team's short-term future, but it's something positive.

For some context, here's how Illinois has performed in the same defensive stat over the past few years.

It's not a coincidence that Illinois made the NCAA Tournament in 2009 and 2011, respectively, while failing to do so in 2010 and 2012. Last season's team managed a tough schedule to get in despite middling advanced statistics, but that's where the good news lies -- right now, this 2013-14 team seems more like those latter teams, superior on defense and better positioned to compete in the Big Ten.

With all of that said, there are the obvious question marks revolving around this entire exercise. Ideally, we'd have a much larger sample, and some examples against better opponents. Even UNLV, as strong a program as its been in recent years, doesn't appear to be the same kind of team that earned national rankings last season.

But the limits of those six games still leave us with something, and it's an admittedly positive conclusion. Even if the Illini aren't far from being 5-1 this season instead of 6-0, it appears that Groce has his current group buying into a strong defensive persona powered by Egwu in the middle. Whether it works against better teams that populate the Big Ten remains to be seen, but at the very least, you can picture the ways this team could beat good opponents. When your schedule starts with mostly fluff and one relatively tough road matchup, these are really the only reflections you can make.

Right now, this is an Illinois team entering a new era. Without Paul and D.J. Richardson, the Fighting Illini don't have the identity and experience that's defined the past couple years. Instead, we appear to have something different, and considering the transition in place, I'd say it looks pretty damn good.