A Sabermetrics Look at Minnesota: How Minnesota Got Better with Tubby Smith

Share All sharing options for: A Sabermetrics Look at Minnesota: How Minnesota Got Better with Tubby Smith

Bringing Tubby Smith to Minnesota from the University of Kentucky brought hopes of NCAA tournament dreams and a Final Four appearance, creating a banner-filled Williams Arena.

Yet, after four seasons as the men’s basketball head coach, Smith’s team has only made the tournament twice, and has not won a single NCAA tournament game, losing games to Texas and Xavier.

Despite the state of Minnesota’s expectation with Smith, who won a National Championship in his first season at Kentucky, he has done a better job recruiting and getting consistent production from his players than Monson did, according to a Minnesota Daily analysis.

Through an analysis, it was found that Smith’s players have had a higher player efficiency rating by almost two points than Monson’s, 13.9 to 12.1, over the past decade.

Each player’s efficiency rating was used to measure the productivity of a recruit. This rating uses all of the available measureable statistics into one formula to give a success rating.

Monson was able to do one thing at Minnesota that Smith has yet to accomplish – drawing a five-star recruit to play at Williams Arena.

Monson was able to attract and keep in-state phenom Kris Humphries, a 2003 five-star recruit. But like most top-tier recruits, Humphries got drafted (14th overall by the Utah Jazz) into the National Basketball Association after one year in college.

During Humphries’ one season, he was able to have, statistically, the best season by a Gopher this past decade.

While Monson was able to get the school’s best recruit, Smith has been able to get five four-star recruits in four years.

Smith brought senior Trevor Mbakwe back to the Twin Cities from Marquette, and he also convinced junior Royce White and junior Rodney Williams to play for Minnesota.

White has since left the program, but Williams and Mbakwe have excelled in Smith’s system.

In particular, Williams started his freshman year as a rotational player, averaging only 4.3 points per game, but is now a go-to player, who now averages 11.5 points per game. When Williams first started his career at Minnesota, he was a player who didn’t shoot for a high percentage and relied heavily on his defensive play.

Williams’ player efficiency rating average is a 16.9, meaning his college career thus far has been average. 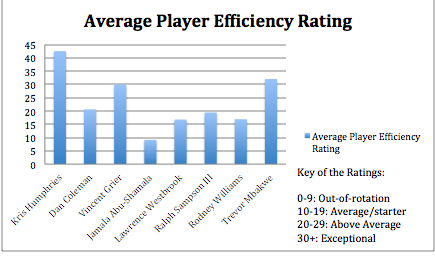 The scrutiny Smith had from media and fans about his Gopher basketball team this past season was justified if you take in account that Minnesota dropped in efficiency from the previous season.

For the first time since his first season at Minnesota, Smith dipped in production.

In Smith’s second season as Minnesota’s head coach, he improved the total efficiency by more than 20 points. The spike had a lot to do with having his own players, and also the players getting used to the system that Smith runs.

The drop in efficiency also happened to Monson two straight seasons earlier in the millennium when Monson relied on a smaller rotation of players and higher overall production from his current starters. The method that Smith has put in, which gives the entire roster playing time, seems to be effective.

However, Smith’s coaching style hasn’t been effective for every recruit.

Senior Ralph Sampson III was expected to make the jump into an elite player in the Big Ten after his sophomore season but was inconsistent his junior year and has digressed back to an average player as a senior.

In his senior season, Sampson III had a player efficiency rating five points lower than his junior year. It was 18.35 this season, while the previous season had Sampson with a career high of a 23.3 rating.

Even with the digression, Sampson III ranks second overall in the past decade of career player efficiency rating, only trailing center Dan Coleman. Both players were able to accumulate statistics in all aspects of the game.

Mbakwe and Williams both have a chance to surpass both players next season in career rating. In Mbakwe’s two seasons as a Gopher, he is second to Kris Humphries in average player efficiency rating.

Along with that tandem, Minnesota is returning a roster full of players who can contribute at a high level. For the first time, the Gophers are bringing back seven players who were average or better the previous season.

Even without guard Chip Armelin next season, who transferred back to his home state of Louisiana to get more playing time, Minnesota is projected to finished in the top third of the 12-team Big Ten Conference.