The results are in: JaJuan Johnson has won the BT Powerhouse Slam Dunk Contest with 42% of the votes in the final round, besting runner-up Rodney Williams by 27 votes. Johnson's dominant performance in Group D, where he won with 92% of the votes made him the odds-on favorite to win it all, and he did not disappoint. Johnson jumped out to a huge lead early in the voting. Williams came on strong towards the end, but couldn't quite get enough votes to make up the difference.

It was a banner senior year for JaJuan Johnson. First he wins the Big Ten Player of the Year and Defensive Player of the Year Award, and now he has what is arguably the most important title of them all: BT Powerhouse Slam Dunk Champion. Congratulations JaJuan!

Thanks to everyone who voted on the dunks, and thanks to the players for giving us such great dunks to vote on. 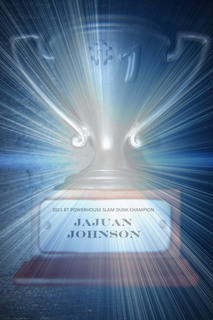